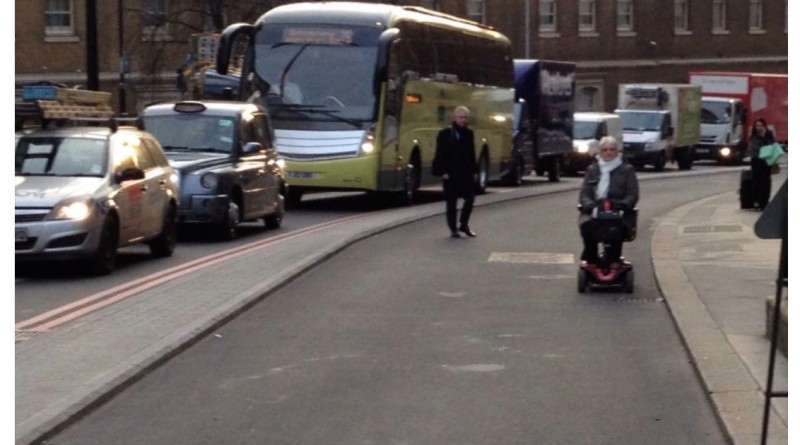 Superhighway construction in London continues, but already part-built, disconnected cycletracks – even without being continuous or having most of the safer junction designs delivered – are seeing notable uses.

This image delighted me. It’s a lovely clear day, and here is a woman on a mobility scooter taking advantage of the smoother road surface, with almost no obstructions and a subtly gentler gradient than the nearby pavement. Nobody’s had to tell her what to do – she’s worked out for herself that her vehicle will work best on the cycletrack. Environments should be intuitive like this, for all users.

However, as the caption shows that is undoubtedly me looking at one image and imbuing it with my knowledge and my own views. Perhaps we almost have the perfect optical illusion here, an image whose interpretation shifts purely with the mind. If you’re convinced that cities must prioritise traffic flow then you imagine all the vehicles are stationary. If you’re a cycle campaigner who’s been amazed by the clearly liberating abilities cycletracks give to many users on mobility scooters and other vehicles in the Netherlands then maybe you see a little of that in London.

Isn’t the cycletrack empty? No! Madge is in it, making great use of it. For her, it’s actually easier to use the superhighway now than for people who cycle, she can roll onto the pavement legally and relatively easily. For those of us that cycle we are instead having to join and leave short sections open only in one direction before braving construction works. It actually means many of us are staying away from the Embankment route, and perhaps even questioning our sanity for using it as it was (I certainly do). But I can’t wait to share the superhighways with Madge and many others on mobility scooters, and more.

I’ve added Madge to the CycleStreets library of campaigning images, as with the right context I think it’s a great example of what the superhighways can bring to all of us provided we build them to a high standard. What’s particularly notable is that cyclestreets map includes comments about where people feel unsafe, and just a few metres away there is this comment from 2012 added via the London Cycle Campaign:

Cycling up the hill on Byward Street is the scariest place I’ve cycled in London. Huge construction lorries put their foot down to get up the hill and despite the cycle lane there’s not much room for error. Then to everyone’s surprise, on the corner past Great Tower Street, the cycle lane suddenly stops and I have seen many a cyclist (myself included) cling to the railings as a lorry makes full use of the road width.

Now perhaps if that doesn’t get across the need for a separate piece of safe cycletrack here, the following questions and videos might help.

How would you react to cycling onto a busy two lane road only to a find a painted, discontinuous lane to cycle in, whilst feeling immense pressure from the vehicles behind you? Would you swear? Would you stop?

Would you be patient behind every large vehicle which has huge blind spots and can’t see you without using extra mirrors?

Would you feel confident that the large vehicles wouldn’t just drive straight over you?

Late at night would you feel confident cycling as drivers race each other on an urban motorway?

Would you feel safe in a purely painted route that barely goes wider than your handlebars as trucks, cars and taxis go rushing by?

Whereas, with the reassuring and clear continuous facility of the separate kerbed two-way track, all kinds of users even beyond people using bikes are plausible, like Madge. Here’s a photo I took one evening, and it may even have Madge in it. There’s even some guy on a MonoWheel. This is progress. Yes, it’s disruptive, it changes London, but it’s a damn sight better than the nonsense of paint on such a busy road we had before. 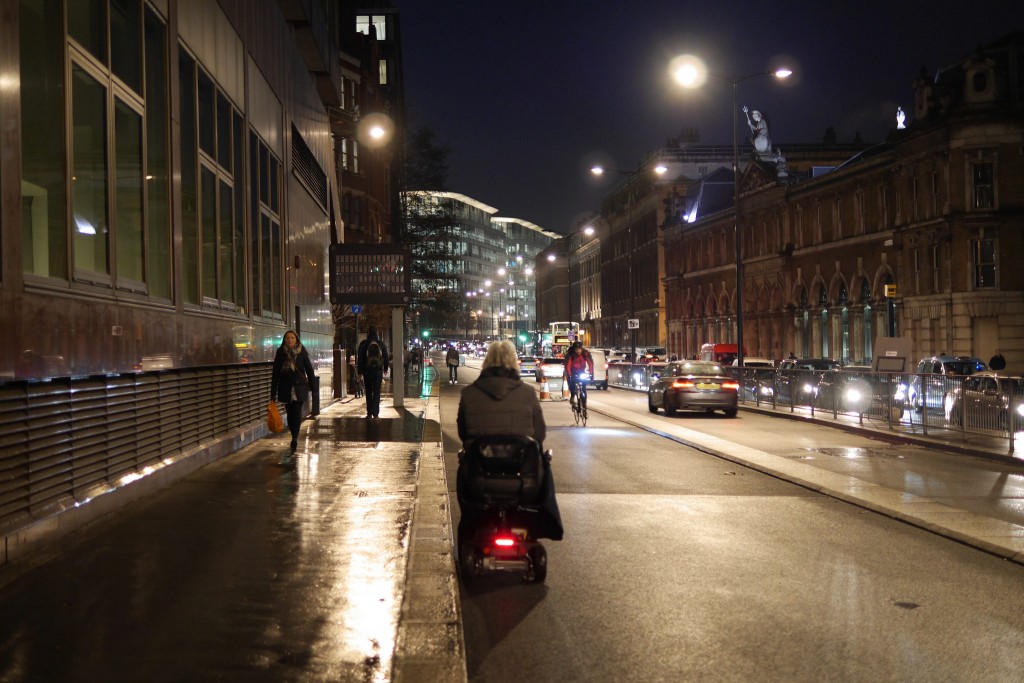 The disruption for the new superhighways was always going to be greatest during construction, and as you can see in these old videos the road was rarely a free-flowing paradise before anyway. When this route is complete (summer 2016) the superhighway can and will be used by almost anyone. It’s not just for cyclists, it’s not about lycra, it’s not about personal bests. It’s for anyone who can take to two wheels – or perhaps three or four – provided they don’t go too fast. The majority of the street – one lane eastbound and two lanes westbound will remain available for motor traffic, but the change from just adapting one lane is considerable for everyone else.

Maybe it’s just Madge using this short, part-built facility today, but it’s me, my parents and my nephew when the route’s completed, and countless more. I can’t wait.

One thought on “Here Comes Madge!”