We live in interesting times, turbulent even. Cycling doesn’t seem quite like the most important issue in the world, but it’s time for me to blow the dust off this blog and talk about it here again. In London we’ve had a pretty successful delivery of the very basics of a high quality cycle network. Don’t forget that even when published the Cycle Vision of 2013 only promised a pretty meagre if high quality network.

The East-West and North-South Superhighways have now been up and running for six months after partial opening a few months before and the Vauxhall Bridge segregated lane has now been in for a year. TfL now claim that over 47% of the core of the Central London Grid is now complete as well, 40km of routes in all. So presumably we’ve started to arrive at something like the plan behind this map which forecast the progress by December 2016: 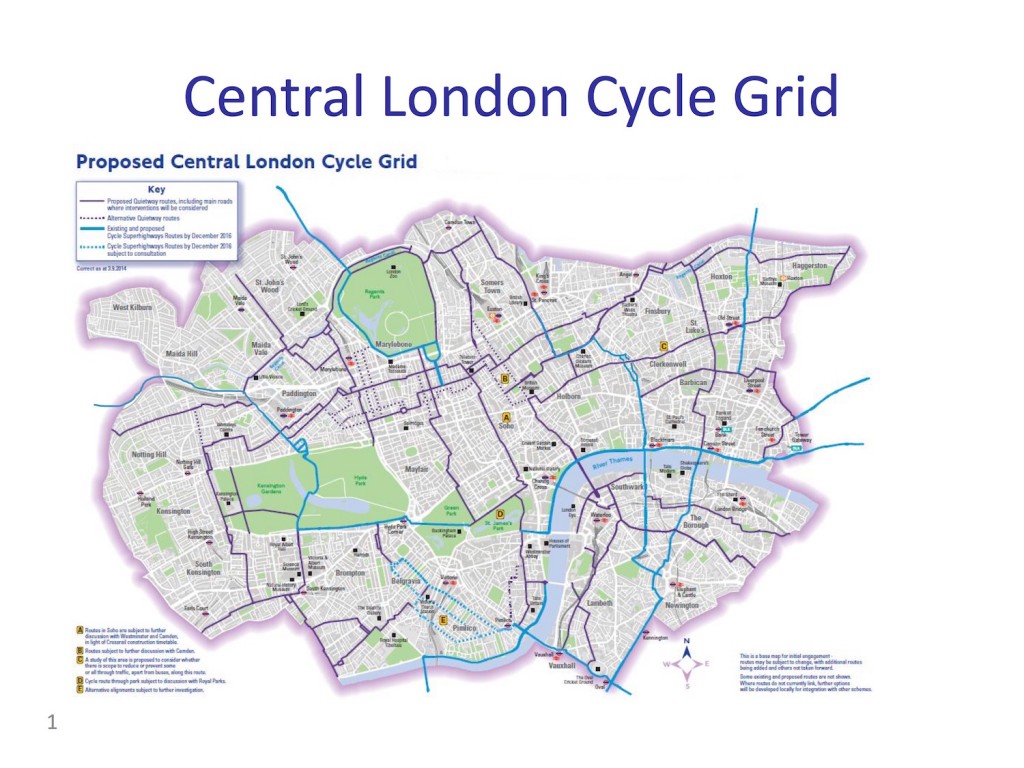 All good? Well not entirely, no. If we get out the crayons and colour in red (cancelled), yellow (delayed or in consultation) and green (construction due) we can see how short we are of even the meagre plans for December 2016. And I’m sure I’ve missed out a few schemes here, so this is better than reality, but brace yourselves!

Ouch. What had been a pretty meagre network starts to fall apart. What have I marked?

Cancelled (red) – Westway and beyond phase 2 of the East-West Superhighway and also Kensington Palace Gardens (still cycleable, but not designated a quietest by Kensington and Chelsea)

Doubtful (yellow) – CS11 through Regents Park to Swiss Cottage, the Clerkenwell Boulevard, some key linking routes in the City of London and any of the many possible ways of taking CS5 from just beyond Vauxhall Bridge into Belgravia to then use a quietway link to reach Hyde Park

Due for construction (green) – The second phase of the North-South superhighway and the link in St James Park (also green, never mind) for the East-West superhighway past Buckingham Palace.

By the way, let me know if you think I should tweak this map, as I’ll happily get the crayons out again to do so.
Each of these losses knocks the grid back quite a bit. And many of these were delayed under the previous mayor. They’re not complete losses either, tiders will seek alternative routes or even ride along roads as they are Westway excluded!), but they will be less appealing and of lower capacity and quality. More people will get injured, fewer people will be willing to cycle and the network that has been built will not quite reach full potential. And of course, almost all of the proposed routes had been defned having eliminated a series of preferable options.

I’m particularly focussed on issues in the west of London where the grid was always quite sparse with only one superhighway and no meaningful alternatives. As I’ve noted previously the fact that we ended up with a superhighway on the Westway was very much linked to the refusal of Kensington and Chelsea council to take up a promising scheme on Kensington High Street.

And now the Westway superhighway is seemingly cancelled, with news forced out of the Mayor’s office after Andrew Gilligan spilled the news. I do think the scheme was always one that was hard for even many who supported the overall cycle vision to fully support, as the suspicion lingered in the mind that it would be better at street level. Val Shawcross has at least seen it important enough to pledge that there will be an alternative in some form. More than that is hard to say, especially as the consultation report still isn’t published despite the consultation closing back in March. We do know that the Westway route had 71% support, but no detail on how that support was weighted. But we also know, that the most compelling alternative at street level to go west was on Kensington High Street, and the local council blocked it when it was considered. But it does still look rather nice, and maybe now that these things have been built elsewhere the time has come to make it happen even in the doubtful boroughs. Could the local cycle group grow, as we saw in Enfield to help make things happen?

And the other superhighways still up in the air? (so to speak, they’re on the ground) Well, the CS11 consultation that closed at the same time has had a consultation report, but still awaits a decision, due by the end of 2016. But the North South Superhighway Phase Two has had a report returned and a further smaller consultation opened, with construction due from spring 2017. So at least that gets to be green on my map. I like green.

After that? Well, there’s Cycle Superhighway 4 to go from Greenwich to London Bridge which apparently is due for consultation some time in 2017 and construction in 2018. After that? Well, I think that’s all there was in the Cycle Vision when it came to superhighways. Though maybe you could also count linking routes to the mini-hollands. Lea Bridge Road in Waltham Forest looks to be high quality though delivery is heavily phased.

So, as the title has it we are currently rather Lost in Transition on cycling in London. Maybe this is necessary, perhaps even natural as we change Mayor from Boris Johnson to Sadiq Khan. But we’re six months in now, is it not well past time the post of Cycling and Walking Commissioner finally filled? Whoever takes the job is going to have a lot to do, not least if they are to honour Mayor Khan’s pledge to make London a “byword for cycling” and “triple the current superhighway provision, with a focus on segregated lanes”. Perhaps there’s a lot of detailed work underway, out of sight that nobody is talking about. Maybe there really are a couple of amazing schemes at the concept stage waiting to break cover from TfL. Maybe Superhighway 4 alone is long enough to claim that just with it and the North-South the mileage target would hit! But it is very hard to square the current pause in decision making with Khan saying we needed to “increase the pace of change”. There’s definitely a lot of work for a new commissioner to get their teeth into, so where are they?

2 thoughts on “Lost in Transition”