A consultation closes on Sunday for a small section of tram track in Croydon that could present both major issues for cycling and a clear opportunity. What I’ll argue here is that it’s essential that TfL achieves the latter.

The loop is a small section of track that simply enables trams to be turned early in Croydon town centre. This is part of a wider plan that Inside Croydon linked (based on the following TfL handout) to a potential splitting of the network and increase in motor traffic on a major road the tram currently crosses over. These were issues noted by many in response to the earlier consultation. 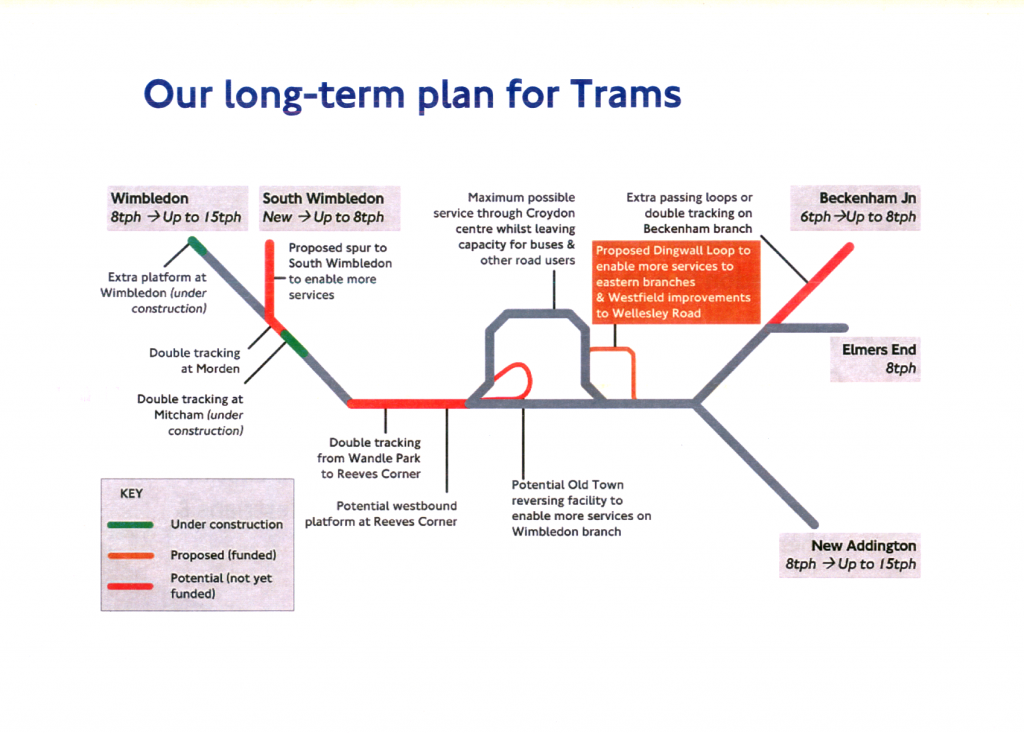 In another piece, Inside Croydon noted:

“The design for all options will need to incorporate cycling provision,” TfL’s paper states, and then provides three schemes which show absolutely no cycling provision whatsoever. Plus ca change, eh?

This situation persists into the latest consultation. We are shown a tram route that will cross over the end of a road used regularly by cyclists on a curve, curve around one side of what is presently a roundabout and finally that will add a further junction to an already hairy and dangerous exit from a dual carriageway.

And yet, repeatedly TfL are seeking to reassure that:

“Cycling provision will be implemented in accordance with TfL guidelines”

There are two problems with this statement.  The first is that there are no designs for handling trams within the recently revised London Cycling Design Standards. The second is that practice in design up to now has been shocking, much like experiences in Sheffield, Manchester and Edinburgh.

There should also be an added impetus for change in Croydon. One of the deaths in London in 2013 involved a man who slipped whilst cycling over the tram tracks who was then hit by a bus. The coroner made a significant legal request with a Prevention of Future Deaths report for change. Under Freedom of Information the council’s response was obtained. The key issues picked up here were that the existing provision for cycling over the tram tracks in Croydon is substandard pavement provision often ignored due to quality issues and a lack of priority and clarity.

Crossing tram track is not straightforward on a bike. Especially on those bikes with two wheels. The issue is that a wheel can get stuck in the tracks or lose grip over the metal, especially in inclement weather. That loss of traction or even trapping in the rails leads to swift and sudden collisions with the road surface. Trams themselves have longer stopping distances than buses and potentially more mass but by far the bulk of collisions occur with other vehicles that happen to be on the tramway such as the bus involved in the fatal collision in 2013.

The solution is to ensure that any crossing of the tracks is at 90 degrees, crossing perpendicular and minimising exposure. That can become a shallower angle down to as little as 45 degrees and skilled riders can even bunny hop but directing people to cycle at 45 degrees may well lead to crossing at 30, and so on.

In Croydon the junction where the fatal collision occured starts with what appears to be dual provision. But actually the path on the pavement is to head straight on. The path to the right is designed for turning left. Almost nothing indicates this, and it is highly unusual.

The few who are willing to cycle here ignore the provided cycle facilities completely from my observations. If you do follow the infrastructure to go straight on via the pavement you are given a reasonable solution to crossing the tram tracks at almost exactly 90 degrees. But there is not a hint of continuity or safety as you are dealing with other traffic and you sacrifice a lot of priority.

The council made clear in responding to the coroner that they were working with TfL on these issues and that the Dingwall Road loop was also to be part of improvement.

I strongly doubt TfL are daft enough to build more tram tracks in Croydon with defects acknowledged by the exchange of letters with the coroner. But it is also now into the second year since the death and no changes seem evident on the ground. What future solutions are we going to see?

Let’s take a little tour of where this loop will go… we head down Wellesley Road, which has a huge set back for most properties along the west edge. The tram route will presumably make use of this space.

Looking back at one of the scenic views of Croydon you can see that on this road currently people cycling share with buses and often just wait in line with them. (yes, that is the thrupenny bit building and no, it’s not listed). This road is set to be a quietway which will reinforce its status as a key entry point for people coming to Croydon by bike.

After turning into Wellesley Road the cycle route from here into Croydon town centre passes over the existing tram tracks. The idea of a jug handle is rather like that of the other crossing I showed earlier – to line up cycles to cross tram tracks at 90 degrees. This is much easier in the context of a coherent and continuous cycle track. If you just provide a facility at the junction, you, well, look at it!

I’ve painted the path a bike is expected to follow in green.

Almost nobody does this. Why would they? Sure, you cross the tram lines at 90 degrees but then you ride head on into a high speed dual carriageway, and then turn left. There is even and island, with tactile pavement leading no a non-crossing of the road.

Believe  it or not, the jug handle was originally built in an even more dangerous configuration that didn’t even line up properly against the tracks. As you can see here the alternative even if going straight on is to use an underpass. Inviting, isn’t it?

There is scope to think big, really big on Wellesley Road.

Hackney are getting this on Westfield Ave in Stratford: pic.twitter.com/xonag6pq5I We need it on Wellesley Rd in #Croydon HT @Rob_reedie

But sadly plans seem to be focussed on making the most of the motor traffic capacity in this corridor. Especially linked to the imminent Westfield shopping centre.

These kinds of approaches to design for cycling near tram tracks are nowhere near the kinds of designs used successfully on the continent.

For the time being though, we can at least be glad that TfL have painted a tram bright yellow to encourage safety. I don’t think I’ve ever seen this outside of the UK.

And of course some signs.

Last month, when the professionals turn up to race the approach used was temporary covering of the tram tracks with tarmac. 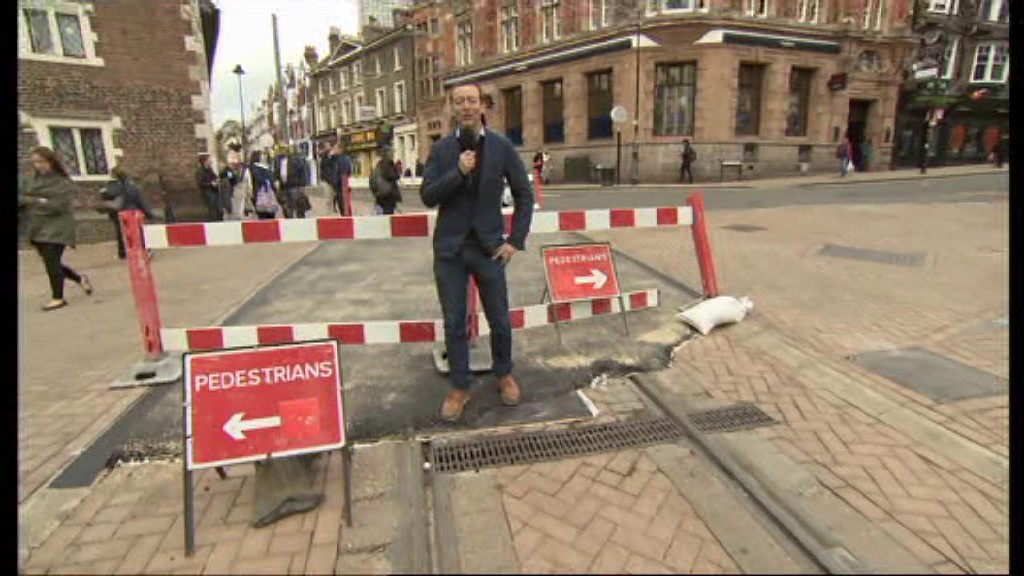 But look at the cycle routes as currently provided in Croydon, they are inevitably bound up with the tram network, even without the loop.

Traffic levels on these roads are high, as well. 31,000 PCU on Wellesley Road and about 11,000 PCU on Cherry Orchard Road.

So, here’s where I’d take this. We should pay attention to how trams have been integrated into successful junction design for cycling and even into straightening out routes for cycling in the Netherlands.

The future of having a major dual carriageway through the centre of Croydon should be questioned.  Campaigns to get mass transit in Croydon were about changing the future away from more roads, more traffic, more pollution and more congestions. Has Croydon realised that dream, even with the only extensive tram network in London? Why not?

Building tram networks will involve taking up huge sections of road. They won’t just move the kerbs, they’ll move the utilities, they’ll move the drains. So while that’s happening a strong central network of segregated lanes in Croydon should be created. Even without the tram, the levels of motor traffic make such a thing a must.

And indeed, whilst that’s happening there are potentially short term issues for cycling, given the one way diversions suggested here by TfL. As seen with a growing number of roadworks in central London two way cycling could and should be preserved during the works. You can see from the purple shading just how much of these roads will be taken up and rebuilt.

So, if you can, please take a few minutes this weekend and tell TfL to think big about cycling, avoid future deaths, enable mass cycling and make the Croydon people dreamed of in 1990, by 2020. Nag them in the consultation to build a better Croydon, that will enable more cycling and make the town centre a more human, less dangerous place. Make them acknowledge the need to provide safe space for cycling through the combination of trams and heavy traffic.

One thought on “Can Trams Turn A Corner In Croydon?”