This week Transport for London announced  a trial of 20mph speed limits on a number of red routes. But what are red routes, and why did they come about?

As a novice Londoner I made two naive assumptions: 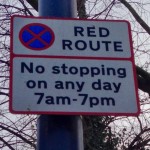 Neither is right, red routes in fact refer really to those roads, usually with single or double red lines where waiting, parking and loading is more severely restricted using the sign on the right. What follows is at best an approximation of the history of red routes along with some interesting archive news reports.

The red routes are a policy from that messy middle period between the GLC and GLA in which the governance of London was mostly conducted from Whitehall. The red routes were a final outcome of a change in policy from road widening and building new roads. The GLC dropped the planning requirements established in the 1950s that had involved setting back buildings to widen roads in 1981. Keep an eye out for the couple on a tandem.

A year later in 1982 Thames News interviewed the policeman in charge of traffic in London, and he said he couldn’t imagine the freedom to drive in London being a long term thing.

Note that the police traffic chief says London was designed not for cars but for using carriages and walking. An entertaining twist on a common refrain, even now that London’s medieval streets (those that are left?) aren’t wide enough for more space for walking or cycling.

Now policy was still moving on at this stage and the GLC in 1984 came up with proposed solutions of further traffic restraint. The proposals for Hackney were very radical and for the first time in some years approached the scale of the environmental areas imagined all the way back to the Buchanan report Traffic In Towns in the 60s.

Of course, the GLC was then abolished. Without a direct authority concerned with traffic in London many things slid. Bus lanes disappeared and enforcement of restrictions became much more lax. You could say the “war on the motorist” was paused, but the war was as mythical then as now. This being Thatcher’s Britain a mooted solution was to bring in a private firm to undertake more enforcement.

This report from 1987 highlighted congestion adding delays of as much as an hour and a half onto bus journeys that should have taken minutes.

The government used the LDDC developing Docklands to push on with major road schemes along The Highway and The Limehouse Link, similar to the proposals dropped by the GLC in 1981. However, wholesale schemes were not really going ahead. There were some area studies, but I’ll come to them in a future post. Traffic wasn’t improving, and as it wasn’t just hitting the buses but even the humble car commuter.

Something had to be done.

And so came the red routes, a scheme devised by John Bowis MP for Battersea and some others, presented to the government in 1989. The scheme had a simple premise, that building new roads seemed an inadequate response to congestion when existing roads were blocked by parking and unloading, much of it illegal. The intent was to have clearer designation of arterial routes, stronger enforcement and heavier fines. It was covered well in this adjournment debate. In December of 1989 Cecil Parkinson as Secretary of State for Transport came forward with the formal proposals for 300 miles of red routes.

Early on there was much opposition and even counter proposals made. In this video a mock-up of a red-route is made for Harringey and their alternative “blueprint route” scheme is shown.

That “blue route” scheme looks rather like road schemes from today that continue to promote through motor traffic and enable cycling on side roads.

The trial routes then went ahead, and were in place by early 1991. A four mile route along the A1 was set up, and the idea was explicitly reported as being about speeding up traffic.

In retrospect I think it’s quite easy to look at the initial red route scheme and see the mistakes. It was clearly a scheme  aimed primarily at speeding up traffic, with no intent on modal shift. It’s plausible it could even have reduced walking and cycling modal share given how the road looks in the first film.

Of course, as so often with changing conditions for parking and loading there was feedback from business owners, so they got the placards out and protested

in the following film from an antiques business and a small factory claimed to have been hit badly. Perhaps the focus on through traffic was too strong. 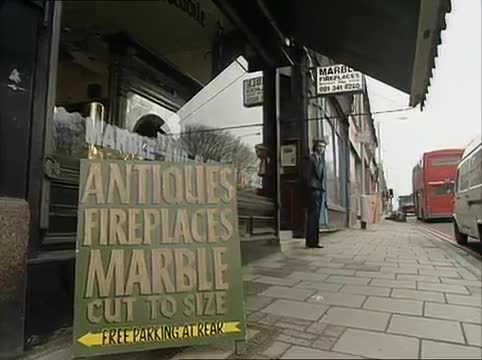 Chris Ostwald of Crocodile Antiques was concerned about his shops survival, though as the capture above shows he did have parking at the rear. Clearly red routes didn’t entirely kill his business as he continues to have a shop (now in Muswell Hill) according to his website. It also appears he has rather diversified, as he now sells second hand music, has a cafe and more.

In July of 1991 the Priority Routes were passed into legislation by the government as a particular provision for London. Several miles were then added, indeed the network now spans about 360 miles. TfL say today that though the red routes cover 5% of London roads they carry 30% of the traffic.

One of the interesting issues of red routes is that loading in contravention of the rules results merely in a fine, something that could be treated as part of the cost of doing business for major firms such as supermarkets. London Reconnections noted this issue in a short post in 2009. I wonder if perhaps penalty points for particularly dangerous parking could be an idea. After all, one reason the speed limits will be adhered to at all on red routes is that contravention leads to both a fine and 3 points on a license.

Anyway, now, after nearly a full 25 years London is finally beginning to reconsider the arterial routes and think not just about through traffic but also about how to make them into pleasant and appealing places to be. 20mph limits are surely just the start of a wider reappraisal of how these roads should function. And not before time! Maybe soon I’ll be cycling off to Crocodile Antiques?